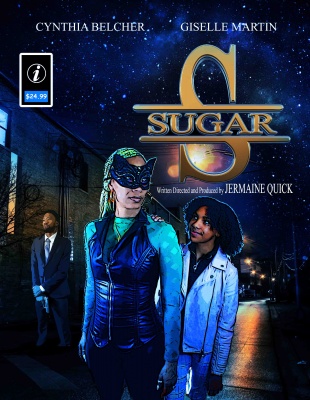 (BPRW) A black superhero for the time; Sugar

A fictional story based on real events

(Black PR Wire) Philadelphia, Pennsylvania – Now the winner of five independent international awards, SUGAR is a fictional story about a single mother, a successful boutique owner by day, who poses as a vigilante at night to protect the battered and abused women. . Written, Directed and Produced by Indie Award Winner filmmaker jermaine fastthe CEO of illadelstyles Entertainment LLC and EQ Films Productions. SUGAR will premiere on the big screen June 16 at 6:00 pm at the Ritz 5 Landmark Theater 214 Walnut St. in Philadelphia, PA.

Physical abuse of women has always been considered an isolated event. Annul Roe vs. Wade makes women more vulnerable. Thus, SUGAR (played by New York actress Cynthia Belcher) empowers women to take charge of their lives. Incorporating nostalgia for black female comic book heroines of the past, SUGAR portrays a single mother raising her daughter “Laniya” (played by the sensational young actress from Philadelphia). Giselle Martin). Sugar’s heroic efforts at night get entangled with her daytime life and lead to Laniya being kidnapped by her nemesis. Will she be able to protect Sugar’s interests or will she melt into despair? East 93 min. The independent drama/action cinema is registered in more than 40 film festivals around the world and has received 5 awards to date.

Award-winning writer and director jermaine fast continues to make films that question our social environment and our temperament in the face of the physical ills of this world. While most Philly indie movies lean towards the drug life, Jermaine finds a way to calm the familiar and raise awareness. From now on its mid-covid Philadelphia Independent Film Festival Award for Best Local Feature, their Los Angeles Film Award for Best Feature in 2020and his nomination for Black History Month for the Greater Philadelphia Film Office for his fifth filmCRUEL”. The SUGAR film’s star-studded cast also includes former local boxing champion Simon “One Punch” Carr (Mr. Everywhere!), whose character is a boxing trainer. Parts of Sugar was filmed at their “One Punch” boxing facility in the Northeast. The soundtrack, produced by Jermaine Quick aka “Donta Deisel”, also features the iconic “Julia Robertson“formally of the group”Ex girlfriend”. Their new title track called “TAKE A STAND” will be on all major platforms. You can follow the progress @ www.illadelstyles.net/soundtrack.