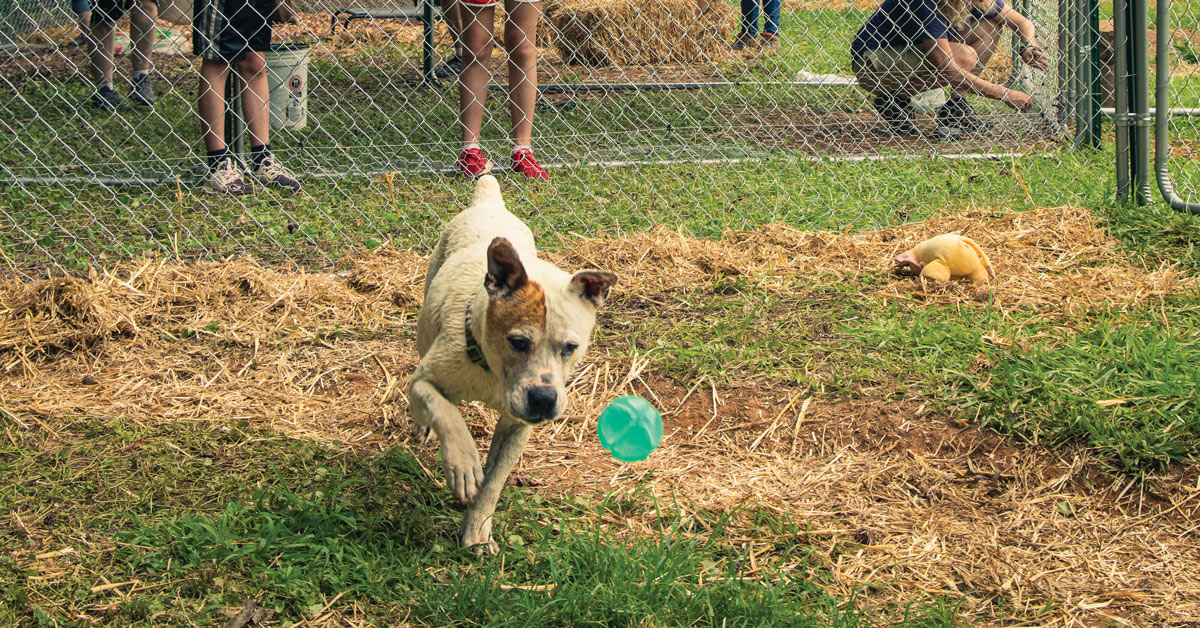 Tethered outside their Barrow County home on a sunny June day, Porkchop and Buster barked and growled as half a dozen strangers invaded their yard. Visitors carried bales of straw, fence panels, and bundles of twine; one used a chainsaw to cut tree limbs. However, the longer the visitors lingered, the more the dogs (both terrier mixes) relaxed. Perhaps they sensed that something good was coming.

A leashed dog is an unhappy dog ​​for a number of reasons, including that dogs are social animals. Tethered for long periods of time, they can become anxious and aggressive and can suffer from physical ailments related to the strain against their collars or exposure to the elements. (The Humane Society says tethering is a risk factor in dog bites and attacks.) Counties and municipalities across the United States have passed laws to ban tethering. And in northeast Georgia, a nonprofit organization formed a few years ago to deal with the problem on a case-by-case basis: the group, called off the chainBuild fenced enclosures for dogs that need them. It was the members of Off the Chain busy in Porkchop and Buster’s yard.

At the core of the group’s work is the conviction that a dog in pain is not always the victim of neglect or deliberate malice; sometimes a pet owner is simply not aware of the harmful side effects or does not have the resources to provide them properly. for it. (A typical double enclosure costs about $1,800.) In addition to providing fencing and doghouses, Off the Chain supports anti-tethering ordinances; is advocating for getting laws on the books in Gwinnett, Hall, and Barrow counties and is currently lobbying for one in Jackson County. For Mike Bagwell, the guy with the chainsaw, the Buster and Porkchop compound was the 52nd fence built that he was involved with. His goal had been 50, he said, “But here I am, I’m still doing it.”

See also  East Bay Pets of the Week for January 14

The new digs for Buster and Porkchop marked the 85th fence construction Off the Chain had completed since it formed in 2017, when Jennifer Summers gathered a few friends around her dining room table in Braselton. “We had all seen individual cases” of dogs tied up and miserable, Summers said, to her, a chow chained down the street. They decided to find a way to do something about it. His first self-funded billboard was for a blue pit bull named Gracie.

Occasionally, their assistance goes beyond infrastructure: For Rusty, a poor elderly beagle with tumors on his neck and haunches, Off the Chain raised money through a Facebook fundraiser to pay for medical care and an enclosure at fresh air. The group’s social media coordinator, Lindsay Baker, showed me photos of Rusty on her phone while we waited to start work on the fence for Buster and Porkchop.

“You never know what to expect when building a fence,” Baker said, pointing to the two dogs. “His owner is turning us away because he insists his dogs are well chained.”

Dog owners can apply for a fence in their own name, or neighbors can suggest a house that looks like it could use one, anonymously if they prefer. Off the Chain had arranged the build with Porkchop and Buster’s owner before showing up, of course, but the reality of renovating their yard had apparently not quite sunk in. He had grown up with chained dogs all his life and was having second thoughts about whether a fence was necessary.

As a couple of Off the Chain board members spoke with him (the group emphasizes his nonjudgmental approach), the rest of the volunteers waited. The fence panels were leaning against the back of the house, the grass was freshly mowed, and we all had work gloves on. After about 30 minutes, the owner gave the final go-ahead and the volunteers spread out around the yard, installing panels, measuring the chicken coop, and sharing snacks and energy drinks. Porkchop jumped onto the end of his six-foot chain, while Buster sat in the shade on top of his doghouse. The owner of the dogs, now much calmer, went out to offer sandwiches to everyone.

As the work drew to a close, Baker handed me a bale of straw and told me to cover the ground inside the fence with it, to keep it from getting muddy on rainy days; cedar shavings thrown in and around the doghouse would deter bugs and fleas. We took one more ice cream break before the big moment: Porkchop got off leash in his enclosure and his human leash welcomed him with open arms. Buster was next. We fed them dog treats and took photos as we celebrated their newfound freedom.

6 other local organizations that help animals and people, and how to support them

AWARE Wildlife Center
Since 2006, AWARE has rehabilitated injured and orphaned wild animals (opossums, raptors, foxes) at its seven-acre facility in Lithonia, where free tours are offered every weekend. Support by volunteering on site or by calling the next time you see an orphaned baby squirrel.

See also  East Bay Pets of the Week for May 27

canine cellmates
Men incarcerated at the Fulton County jail receive the love of the local shelter dogs and give them love in return, along with a little obedience training. Once they complete the 10-week course, the dogs “graduate” into their forever homes. Volunteer support (possibilities include encouraging and helping coordinate adoptions) or donating to fund veterinary care and purchase of supplies.

Happy Tails Pet Therapy
With Roswell-based Happy Tails, the mascots perform a number of services, including visiting hospitals, nursing homes and rehabilitation centers; “animal assisted therapy” along with occupational or physical therapy; and READing Paws, which promotes children’s reading skills. Become a member or volunteer with your dog, cat or rabbit.

pet friends
By providing free pet food, supplies and spay/neuter surgeries to struggling families who are at risk of having to give up their pets, this Atlanta organization helps reduce the millions of animals euthanized each year. Support by donating money or food, toys, litter, and small cat carriers.

This article appears in our August 2021 topic.