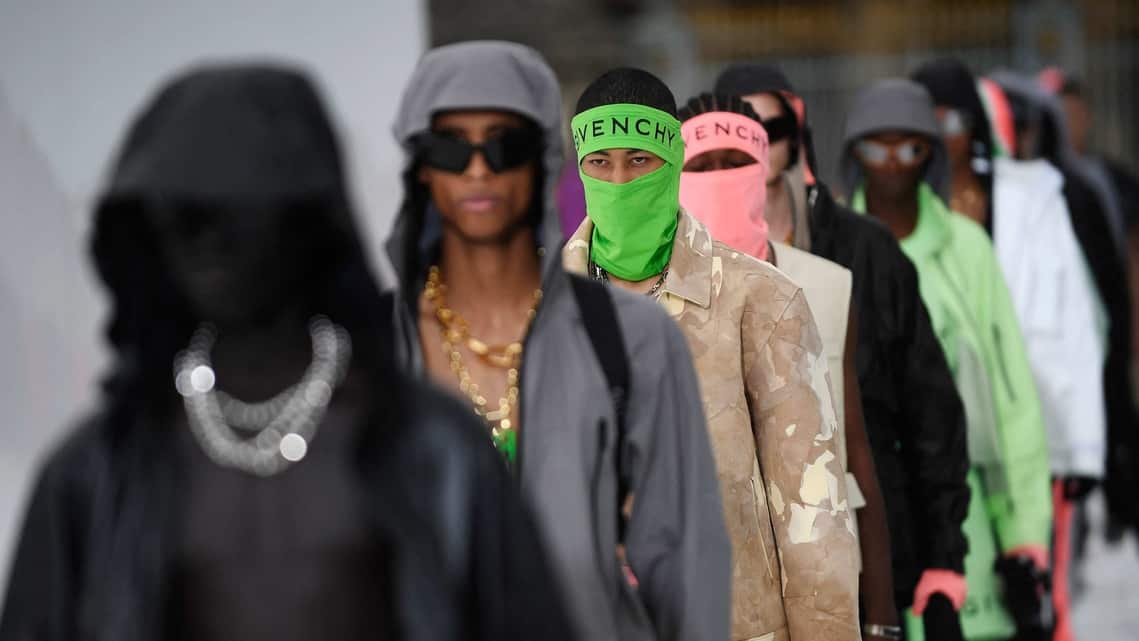 For the first major collection of the men’s season at Paris Fashion Week, Givenchy models walked on water.

A giant fountain filled with milky white water and foaming mist in the Ecole Militaire courtyard served as a flowing catwalk where bare-chested models in waterproof shoes stomped and splashed into blinding light.

Matthew M. Williams clearly wanted to make a splash at his first independent menswear show since being appointed in 2020. But did the American designer dive deep enough?

Here are some highlights from Wednesday’s spring-summer 2023 shows:

This was Audrey Hepburn’s couture Givenchy in name only. Williams’ vision is urban, sporty and minimalist.

The American designer, a former collaborator with Lady Gaga and Kanye West, brought his streetwear style back to the catwalk in haute Paris. This season’s muse was the style of Jamaican reggae singer Alkaline, who worked on the show’s soundtrack.

Williams’ past observations produced many of the looks. The laser-cut house logo bomber jackets that opened the show were inspired by ones the designer used to admire in Harlem, New York. Elsewhere, California street styles mixed with preppy looks, like ripped tailored pants.

Williams said of her behind-the-scenes collection that “it’s all grounded in reality. She could see the boy in every look on the street; To me, that’s a really modern approach.”

But sometimes this everyday environment let the collection down. For example, a simple pink tracksuit, worn open over the bare chest with a gold chain, didn’t feel developed enough as a couture runway idea.

Still, the tailoring was strong throughout, as expected for the house, for example in a roomy black 1980s tailored coat that cut a fine shape.

On the occasion of haute couture week, Dior revives a 19th-century floating spa that existed on an elegant barge on the Pont-Neuf bridge.

The spa, which was called the Bains de la Samaritaine, was reputed to be the most luxurious in Western Europe at the time and the mother of modern luxury spas.

This season, Dior partners with Cheval Blanc Paris to create its own vision of the cruise spa, seating five passengers in four suites for a two-hour journey across the River Seine. It will take place between June 29 and July 13.

Streetwear and tailoring collided in a melting pot at a show by designer Anthony Alvarez, who counts Justin Bieber among his clients.

Álvarez is someone to watch, with her fashion repertoire for the MTV generation that combines travel with streetwear and bold colors.

For spring-summer, he stepped up the psychedelia to produce a bold, baggy collection. Baggy multicolored pants, in the BLUEMARBLE print, were joined by an oversized coat in acid greenish-yellow with a flecked texture. An 80s pajama bottoms look was responsible for one of the best looks in the collection, in pearly white. It arrived between baggy jeans with rhinestone four-leaf clovers.

See also  4 things to know about dating an Aquarius woman

But this show also grew out of the designer’s rich heritage. Álvarez was born in New York with a mixture of Filipino, Spanish, French and Italian roots. The collection celebrated this globetrotting vision. Ethnic shirts mixed with silk varsity bombers and tied leopard scarves that looked as ready for a safari as it was for a rock concert.

The brand name itself is global, taken from the iconic photo of Earth taken in 1972 by the crew of Apollo 17.

The design triumvirate Jose Lamali, Jeremie Egry and Aurelien Arbet at Etudes used an abandoned railway outside Paris as a setting and creative springboard for an urban-themed exhibition.

It was the first in an upcoming series of site-specific shows, using a location or environment as inspiration for design. Paris was a logical starting point for this French brand, although here “lesser known Paris” was what the house said it was channeling. From the platform, guests watched the Petite Ceinture, or Little Belt, train, a twenty-mile track that circles the city.

Frayed white jeans, distressed jeans, hiking shoes, industrial-looking baseball caps, workman’s overalls and aprons paired with utilitarian pullovers and pullovers. They seemed to evoke the young outcasts of the 90s, who might have wandered the disused train tracks.

These urban references were very well inspired by tailoring. Loose-fitting tailored jackets, in a boxy ’80s silhouette, were layered over matching pants that were cut in a funky way below the knee, leading to military-style boots.

One of the few menswear designers, Andam Award-winning British designer Bianca Saunders looked confident on Wednesday in a slick sophomore show that channeled her native London.

See also  Russian IOC members are not to blame for the war in Ukraine: IOC's Bach

Saunders, who has Caribbean roots, quickly rose to fame after graduating from Central Saint Martin’s a few years ago. Minimalism was at the heart of this exhibit.

Extravagant oversized details like collars and pockets were creatively transformed into artistic forms, sometimes in looks bordering on the space age. A silver glam rock suit with sanitized elastic heels evoked the pandemic.

Also read: How men’s fashion has evolved over the years