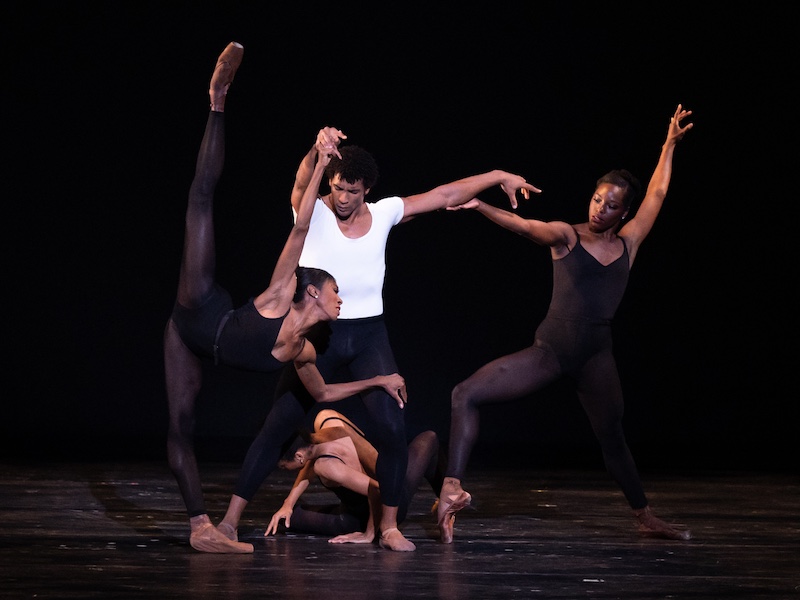 Ballet has had a white supremacist problem ever since the first steps were codified at the court of Louis XIV. Once a way to convey power, wealth, and proximity to the French king, over the years the dances once practiced and performed by courtiers became a professionalized art form that emulated the hierarchical restrictions and structures of the French system. European court. More than four centuries later, ballet remains an elite and, in many cases, predominantly white art form.

Predominantly black ballet companies have been few in the past century, including one homegrown here in Washington, the Capitol Ballet Company, founded by the formidable Doris Jones and Claire Haywood of the Jones-Haywood School of Dance, who still teaches new generations. of primarily African-American ballet students at his Georgia Avenue NW studio. Immediately after the assassination of the Reverend Dr. Martin Luther King, a New York City ballet star and George Balanchine’s first black principal dancer named Arthur Mitchell founded the now venerable Dance Theater of Harlem, today run by Virginia, a native of Harlem. Washington and former DTH dancer. Johnson.

But black ballet dancers are not unicorns. And that was exactly what two mixed-bill ballet programs at the Kennedy Center Opera House, plus additional panels, master classes and ancillary events that comprise Reframing the narrative, meant to prove. The opening night performance began with a narrator invoking the spirit of Sankofa, from the Ghanaian Twi language, which means looking back while moving forward, as a way of honoring the “unicorns” of the past: ballet dancers. blacks whose successes have not always been recognized and praised to the same extent as their white counterparts’.

Next, a simple screen featured a roll call of dancers assembled by a former Harlem Dance Theater dancer, Theresa Ruth Howard. Memories of blacks in the ballet, an archival project to collect evidence that black bodies are important in ballet and should not be ignored or forgotten. The drop-down list of 624 names on opening night, just four nights later on Friday June 17, had grown to 650 names.

Reframing the narrative it is meant to illuminate black excellence in the world of ballet, stated co-curator Denise Saunders Thompson, president and CEO of the International Association of Blacks in Dance, in an address to the audience during the program. She was joined onstage by co-curator Howard, who worked on a Kennedy Center-commissioned work intended to showcase selected choreographers’ black ballet voices to guest dancers from high-profile ballet companies around the world. to participate. Howard then offered the audience a question to ponder at this historic coming-of-age moment for the ballet world: “What does reframing mean to you?” He noted that it comes as both provocative and inviting, but is also intentionally a gift “to us and to you,” the audience.

See also  Casey Johnston says lifting weights is for everyone

Byrd created “From Other Suns” during a two-week residency at the Kennedy Center at REACH this month. Based on Isabel Wilkerson’s 2010 account of the Great Migration, The heat of other suns, when African Americans moved from the South to the North, the Midwest, and the West in the early 20th century. This migratory change changed the nation. In “From Other Suns,” with a score by Kennedy Center composer-in-residence Carlos Simon, the work is a meditation on movement, from the opening when a single man takes the stage to the evolving groups, trios and couples that weave together the dancers in linked chains, swirling vortexes, and ultimately a line traveling in single file across the diagonal and offstage. Byrd, a modern dance choreographer, has an affinity for the clear precision and lines of ballet, but he is not married to classicism. Rather, he builds on the coded vocabulary of ballet but makes it his own, allowing dancers freedom in their torsos, hips, and arms before they reconnect with their centers. In intricately coupled moments, pretzel-like lifts hold the women in difficult balances, while the dancers find the ground, even on their backs, with their toes in the air.

If Byrd has a narrative for “Of Other Suns,” it is neither obvious nor necessary. Instead, the evolving structure of groups moving en masse, or individuals or couples drifting apart, lends a migratory sensibility to the piece and, with Pamela Hobson’s saturated, shadowy lights and black leotard-and-stockings practice clothes for the wardrobe, the work resonates. with a somber tone. In a nod to mid-20th-century neoclassicism, some balanchinismos shine, but by no means make a statement or pay homage to America’s foremost ballet choreographer. Instead, these glimpses are simply an acknowledgment that this 21st-century American ballet draws from many roots; others include simple vernacular and pedestrian moments wedged in and between multiple pirouettes or spliced ​​split jumps.

With DTH’s long history of being a regular visitor to the Kennedy Center, particularly in the 1980s and 1990s, and later offering annual summer pre-professional ballet training for aspiring dancers, the reframing The week opened with the company’s “Balamouk,” a brilliant, jazzy, folkloric romp by Belgian-born, Amsterdam-based Annabelle López Ochoa, which allowed the company to show its personality and poise. The company, known for its classical and neoclassical skills, also shared the “Odalisques” variation for the classic work. the corsaira study on robust balances, turns, and spikes by Amanda Smith, Alexandra Hutchison, and Ingrid Silva.

Opening the second program on Friday night, DTH gave a nod to its lineage with “Gloria” by resident choreographer Robert Garland, featuring Francis Poulenc’s staging of part of the Catholic Mass. The curtain parted to reveal a septet of girls, smiling and showing off their youthful bra port — arm coordination. Garland frequently draws on street and club dances, easily renaming them vernacular ballet. “Gloria” hints at that at times, with extravagant elbows and folksy vine steps, but the piece emulates both a glittering bow and spiritual strength, particularly when a woman is carried overhead in a crossover position.

On Tuesday’s opening night program, the Ballethnic Dance Company also brought a work based on the spiritual. “Sanctity,” choreographed by company co-director Waverly Lucas, with live percussion and a jazz score by L. Gerard Reid, draws on the African roots evident in the score and physicality. Each dancer contributed both poetic statements, which were voiced aloud (though difficult to hear with the live drums), and talisman-like objects. These were carried and placed in an altar-like structure while the performers, dressed in white, danced. Cultural connections to the roots of African forms and structures remained evident even with the occasional ballet-based work in the foreground. On Friday, the company brought excerpts from its feature film “The Leopard Tale,” an entertaining and imaginative journey into the African jungle and plains that features undulating, serpent-like creatures and a pair of playful, predatory leopards. This crowd pleaser featured plenty of splits, high kicks and acrobatic tricks throughout the adventure.

Muddy Waters, BB King, Koko Taylor and Bobby “Blue” Bland put the artists of Collage Dance Collective in a bluesy environment. With the tremor and sound of slide guitar, “Bluff City Blues,” a jazzy modern take on the blues, features choreographer Amy Hall Garner’s earthy moments, but sometimes, even with the fan kicks, the changes of hips and drumbeats, it gets a bit formal, and men’s blue polo shirts don’t feel quite right. But the company does a great job of getting the audience to clap, a feat in a ballet-centric show.

Collage capped off Friday night’s program with its new production of “Firebird,” set to Igor Stravinsky’s famed score. Canadian-trained founding artistic director Kevin Thomas choreographed this fairy tale of a prince, Ricky Flagg II on Friday, searching for his soulmate who encounters an enchanted firebird, Chrystyn Fentroy, in the woods who presents him with a magic pen. The cast is completed by Precious Adams of the English National Ballet as the Princess of Unreal Beauty and various wizards, maidens and monsters. The colorful ballet featured scenery by Alexander Woodward and costumes by Gabriela Moros Díaz. Originally a 1910 Ballet Russes piece, this 2021 version retains the plot and vision of the ballet and reflects a contemporary attitude in the performances.

Reframing the narrative’Co-curator Denise Saunders Thompson shared with the audience that by viewing these shows she wanted to create a “blackout.” In high school parlance, that means fans of a team wear black for a night game. But here, at the Kennedy Center Opera House and in rehearsal studios for a fortnight in June, this blackout was far more significant. Representation on stage was a given, but Thompson went further and ensured that the conductors, stage managers, lighting designers and others working behind the scenes were also artists who identified as black or brown. . Ballet for centuries has been a white art form, from its tutus and tights to its choreographers and dancers. Reshaping the narrative is another step in forging a path toward a more equitable and representative art form for all people.

the program for Reframing the narrative It is online here.