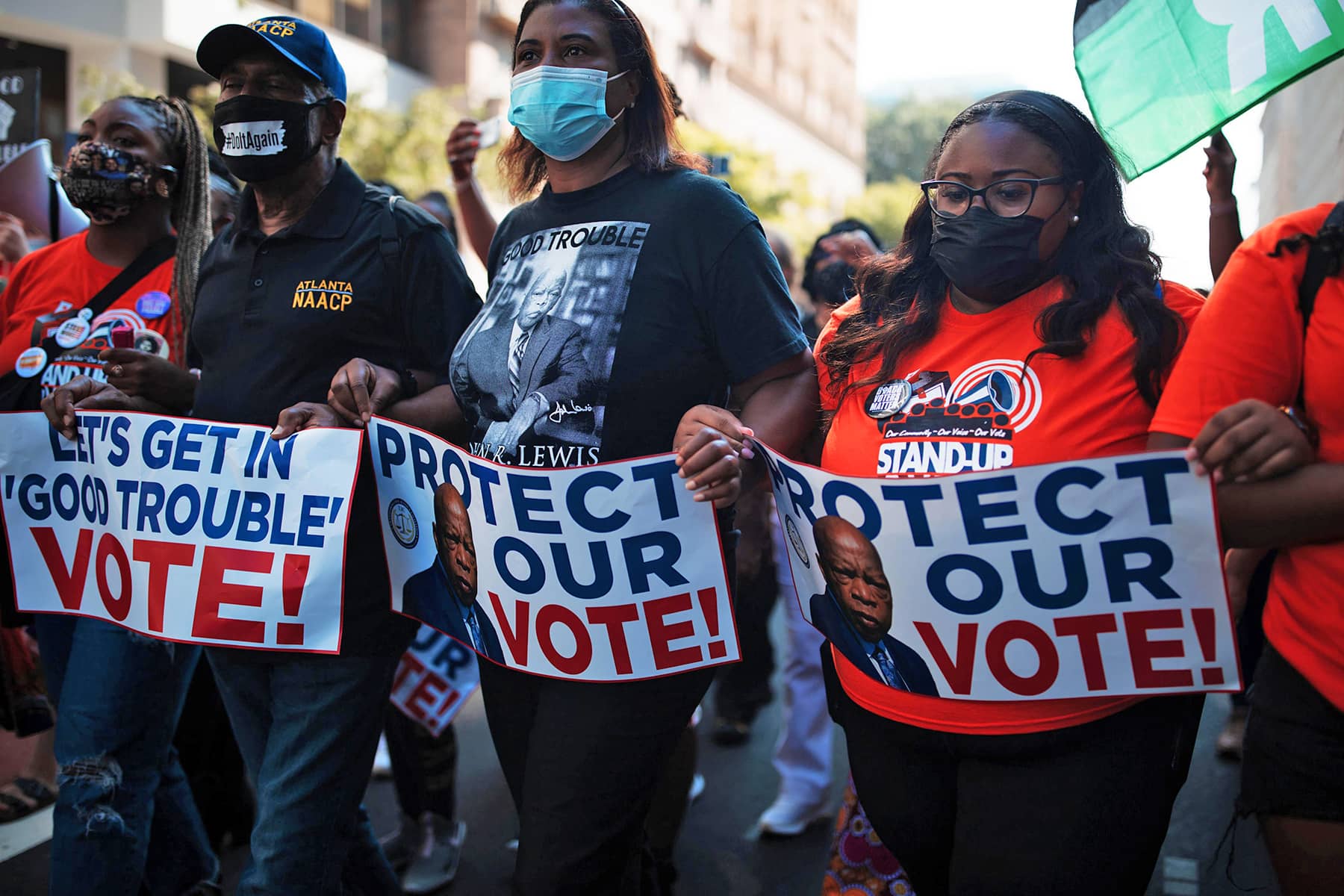 know about Voting Rights Assault: Midterm Elections May Mark the Beginning of the End for Our Multiracial Democracy

The upcoming midterm elections in the United States are of paramount importance, as the future of multiracial democracy in the country hangs in the balance. What happens during the 2022 election and the 2024 presidential election will determine whether the United States has the potential to sustain a viable democratic system of government.

As American citizens seek to exercise their right to vote, the Republican Party has been waging a nationwide attack on the right to vote. Republican attempts to prevent some Americans from voting are part of a larger effort to erase fundamental rights and create an autocratic Trumpian state based on white Christian nationalism.

This year, at least 27 states have introduced or enacted 250 laws designed to restrict voting, according to the Brennan Center for Justice. This comes after a record year in which 19 US states enacted 34 restrictive election laws in 2021.

These bills, which have a disproportionate effect on voters of color, are insidious measures designed to obstruct the vote and impede voter access and participation. The Republicans’ open war for the right to vote takes place in the context of a political party that appeals to a shrinking base of angry, aggrieved white people who want to “make America great again” and return to the United States. days when America was great for white men.

For a Republican Party with unpopular policies and making proposals exclusively to this voter base, minority rule through voter suppression is the only possible path to power.

Another leading state in voter suppression is Florida, whose Governor Rick DeSantis signed a law restricting vote-by-mail ballots and making it a crime to provide water and snacks to voters waiting in long lines. A federal judge struck down parts of the election law because it targeted blacks and made it difficult for them to vote. Meanwhile, DeSantis also eliminated two black congressional districts through racial gerrymandering and created one of the few election police forces in the country.

The official purpose of the new police unit is to crack down on voter fraud, but voter fraud is extremely rare in the US Still, Republicans cite rampant voter fraud as a pretext for enacting these unfair election laws.

The GOP claimed that the purpose of one of its recent voter suppression bills in Texas is to maintain “purity of the polls,” language used during Jim Crow segregation to prevent blacks from voting because they were unfit. to cast a vote. That law makes it more difficult to vote by mail, allows partisan poll watchers to intimidate voters, and criminally punishes poll workers if they encourage mail-in voting or increase voter access.

Some states like Texas, Missouri, and Oklahoma are enacting laws to “sabotage” elections, laws that allow partisan meddling and undermining of the electoral process, including by creating avenues to nullify valid election results. These measures destroy any pretense of a fair, transparent and accountable electoral administration.

To make matters worse, there is the rise of pro-Trump politicians, those who believe in and promote the “big lie” conspiracy theory that the 2020 presidential election was riddled with fraud and that President Joe Biden stole his Trump elections, running and raising funds for secretary of state races across the country. A bureaucratic position once ignored, the secretary of state administers the election for a given state.

Trump has endorsed secretary of state candidates in Arizona, Georgia and Michigan. If they win, it is presumed that these pro-Trump candidates would fraudulently manipulate their state electoral apparatus to ensure a victory for Trump if he runs in the 2024 presidential election. Even now, motivated by conspiracy theories about voter fraud, Republican officials and Extremist election activists in eight locations are plotting to gain illegal access to voting systems.

In the absence of guaranteed voting rights for all eligible citizens, and with a complete denial of voting rights to marginalized groups, Republicans will enjoy minority rule in the Senate, the Supreme Court, and the Electoral College.

This is not only undemocratic, it is undemocratic. If Republicans win the midterms through voter suppression, they will continue to enact unpopular measures, such as book and abortion bans, bans on political protests, and teaching racial justice in schools, and may block any initiatives to address climate change. Democrats’ congressional investigations into the attempted government overthrow will also be nullified.

Furthermore, American history has shown that voter suppression relies on violence to maintain minority rule. Beyond the racist election laws that extinguished black power and control of state and local governments in the South after the US Civil War, segregationists in the Jim Crow South relied on racial domestic terrorism, the burning of of black churches and lynchings by the Ku Klux Klan to intimidate blacks. and maintain power by force.

Similarly, Republican foot soldiers like the Proud Boys and Oath Keepers, already emboldened by their deadly January 6, 2020 insurrection at the US Capitol, may employ more violence to consolidate their power. A Republican control of Congress could lead to the impeachment of President Biden, and some Trump supporters have floated the idea of ​​installing Donald Trump as Speaker of the House of Representatives.

What can prevent this state of affairs, given that many suspected Jan. 6 perpetrators under investigation continue in their positions as government officials in the federal legislature and possibly the Supreme Court?

If this major threat to democracy and the rule of law is not averted, it could spell the twilight of multiracial American democracy, or at least the promise of a democracy that was never allowed to flourish.

Federal voting rights legislation would provide an effective remedy against corruption and power grabs at the state level, and stem the tide of these brazen voter disenfranchisement efforts across the country. Last year, the House voted for two bold voting rights bills: the For the People Act, which would reform political campaign finance and expand voting rights, and the John Lewis Voting Rights Act, that would restore the Voting Rights Act of 1965, a vital law that the Supreme Court struck down in 2012.

Yet the Democratic-controlled Senate, facing opposition from Republicans and corporate Democrats like Kyrsten Sinema and Joe Manchin, who receive funding from anti-civil rights Republican mega-donors dedicated to decimating Biden’s agenda, will not has been able to pass the legislation in the Senate. .

The Republican assault on voting rights has taken center stage in time for the midterm elections, but Democrats apparently lack the resolve to take immediate action on this or anything to save democracy or even maintain their own power. As Democrats look back on a distant era of bipartisan cooperation, the Republican Party remains America’s greatest threat. The time has come for people of goodwill to act and reverse this disastrous course before it is too late.